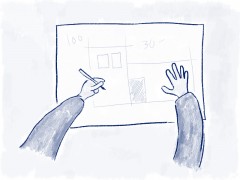 What sort of ‘plan’?

The first thing to decide is which sort of ‘plan’ is right for you.

This could lead on to a discussion of what is good and bad and what could be changed in the area to improve it.

This will start to build up the evidence base for drawing up a Neighbourhood Plan. This process is sometimes called a SWOT analysis, standing for Strengths, Weaknesses, Opportunities and Threats but there are other similar models.

The characteristics of an area’s buildings, roads and open spaces give the area its special character. This is the basis of a ‘Character Appraisal’  Character Appraisals are being carried out on all Bristol’s conservation areas and the methodology can be used for other areas too.

You may decide that there is one particular site that is likely to change and by drawing up a Site Brief you can set out what the community would like to happen on that site when it is developed for instance, what aspects of the site need to be protected or what opportunities to improve the wider area could be taken when the site is developed, like allowing views through or into the site, or access through the site to make better links for walking, cycling or wildlife.

A guide called Choices and Choosing, written for CPRE (Campaign for the Protection of Rural England) Gloucestershire by the Localism Network sets out most of the options.

The guide takes you through the differences between various planning exercises and describes the way in which each are most effective.

The guide also talks about ways in which you can get involved in development through the pre application community involvement process, planning performance agreements, Neighbourhood Development Orders and the Community Right to Buy.

You could choose to do a set of Development Principles which your group will use to respond to development proposals in the area. This would be appropriate for areas with limited opportunities for larger developments.

Drawing up a Neighbourhood Development Plan

Under the Localism Act 2011, communities were given the power to draw up their own Neighbourhood (Development) Plans which would then be adopted as policy by the Local Planning Authority.

In Bristol, the local authority area is not broken down into separate parishes so there is no body already in place to draw up a NDP for an area. The community therefore has to identify the area which it would like the NDP to cover and be confirmed as the appropriate body  to carry out the task ie the Neighbourhood Planning Forum NPF.

A Neighbourhood Development Plan, using powers in the Localism Act, has statutory ‘weight‘, that means it is a planning policy document which is an important consideration when future development proposals for the area are assessed.